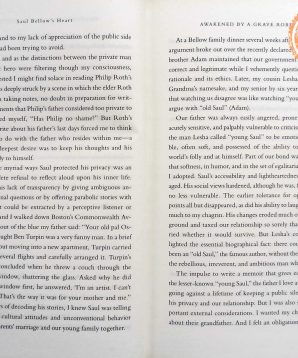 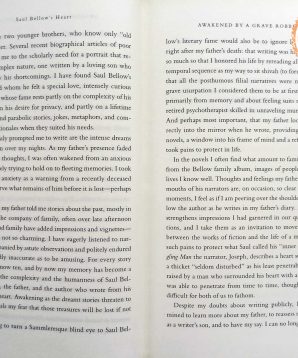 In this warm, affectionate, yet strikingly honest memoir, Greg Bellow offers a unique look inside the life of his father, one of America’s greatest twentieth century writers. Saul Bellow, the famous but fiercely private Nobel Prize winner, was known to be quick to anger and prone to argument, but he shared a tender bond with Greg, his firstborn.

In Saul Bellow’s Heart, Greg gives voice to a side of Saul unknown to most, the young Saul – emotionally accessible, often soft, with a set of egalitarian social values and the ability to laugh at the world’s folly and at himself. Saul’s accessibility and lightheartedness waned as he aged, and his social views hardened. This is the “old Saul” most well known to the world, and these changes taxed the relationship between Bellow and his son, now an adult, so sorely that Greg often worried that it wouldn’t survive. But theirs were differences of mind, not of the heart.

Interweaving memories, personal stories, and autobiographical references in Saul’s books on which he can shed a unique light, Greg Bellow reveals himself to be a fine prose stylist and never shies away from the truth about his father.